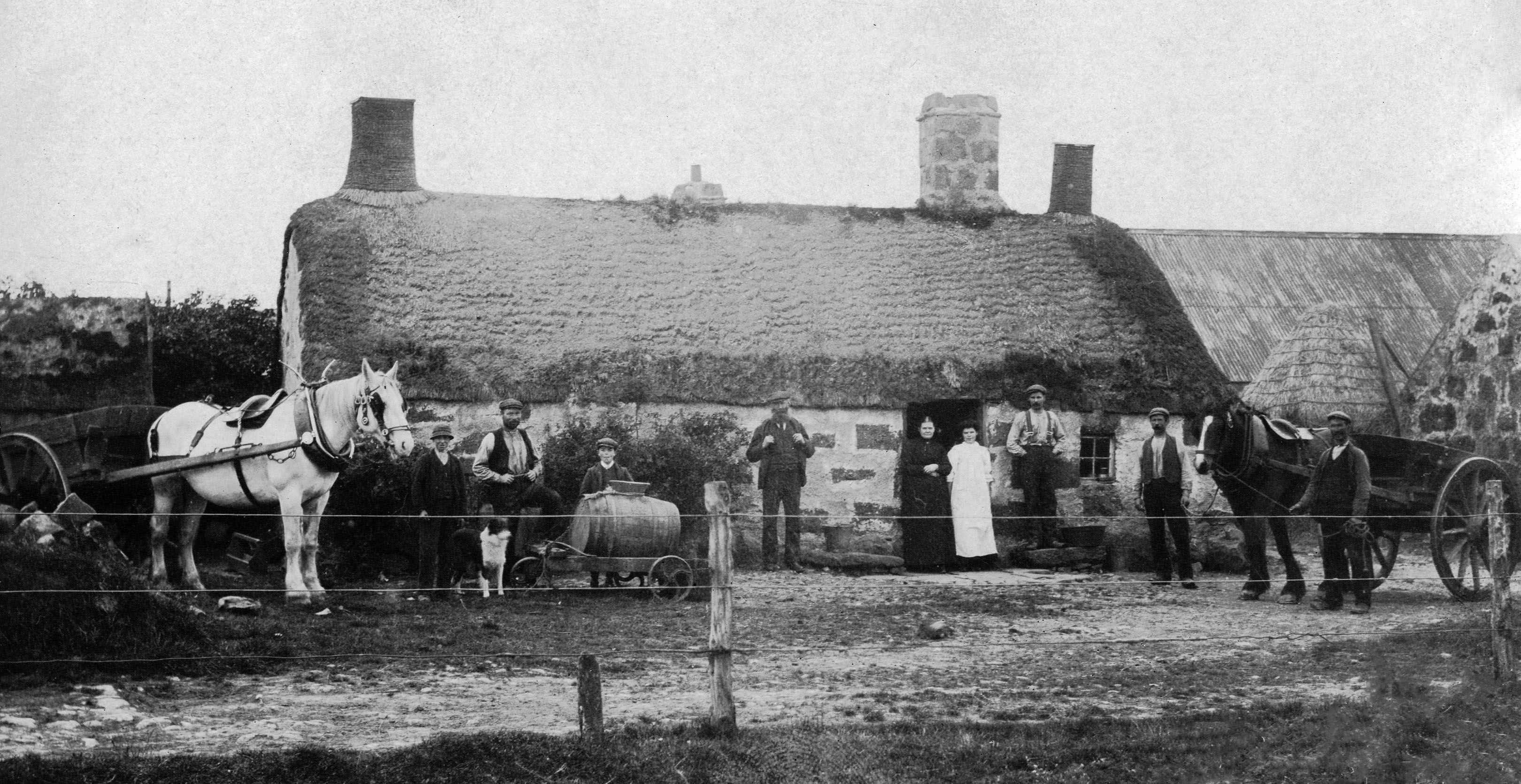 Standing in the doorway of the cottage is Ann Jane Sangster (left) with daughter Ann Nora (who married George Smith his parents farmed at Lintmill).   Smith and Sangster family members are also in the photo.

Ann Jane was born at Pitscow near Mintlaw in 1842.  Her parents  were Eleonora (nee Cheyne) and Alexander Angus, her father was a shoemaker/farmer.  At the time of her marriage she lived at North Cortiecram (now Bogs of  Kininmonth) with her father and stepmother Margaret (nee Watson).  Eleonora died sometime between 1843-50.

Alexander was living along with his wife Margaret at Cortiecram  with Ann Jane and James at the time of his death in  November 1882. He drowned in the North Ugie whilst on the way home from a roup at Mill of Rora.

On 13th December 1863 Ann Jane married James Sangster.  They were married by Rev. Dr Charles Gibbon M.A., Lonmay.  standing to the right of Ann Jane), they lived and farmed at Cortiecram, a tenanted farm of 125 acres.

The family was known to be a musical one. James played the fiddle and sang. Ann Jane corresponded with Gavin Greig, New Deer via his columns in the Buchan Observer.  He also paid several visits to Cortiecram and recorded a large number of tunes.  Ann Jane made up songs herself but picked up others from people in the district.  Her cousin Mary Dunbar (nee Angus) also contributed to Gavin Greig.

Ann Jane died at Cortiecram on 17th November 1920 aged 77.  Her obituary was headed (An appreciation by One who Knew Her) was signed J.R.I. (John Ross Imray) who was a local poet and teacher of music. He lived in Longside.  He described  Ann Jane as having inherited a love for all descriptions of Scottish literary and poetical work.  During her life she composed a large number of exquisite verses written mostly in the the Doric of which as an exponent she had few equals.  Several of those have appeared in the local and Northern Press.  She was well versed in the old ballad and song lore of Scotland.

In every sense of the word the deceased was one of the best types of old time Scottish  womanhood.  Free from ostentatious display, she possessed great versatility and her homely  ways were shared and appreciated by rich and poor alike .

Ann Norah’s daughter, also Ann Norah was born at Lintmill Croft she went on to become head teacher at Ballearn School and was well known in the local area as Annie Smith.  She gave up her post in 1948 and in 1951 she married Italian born Orlando Fontana.  They lived at Backhill of Overbrae, Fisherie.  She died in 1971.

Thank you for your generous support.

This website uses cookies to improve your experience while you navigate through the website. Out of these cookies, the cookies that are categorized as necessary are stored on your browser as they are essential for the working of basic functionalities of the website. We also use third-party cookies that help us analyze and understand how you use this website. These cookies will be stored in your browser only with your consent. You also have the option to opt-out of these cookies. But opting out of some of these cookies may have an effect on your browsing experience.
Necessary Always Enabled
Necessary cookies are absolutely essential for the website to function properly. This category only includes cookies that ensures basic functionalities and security features of the website. These cookies do not store any personal information.
Non-necessary
Any cookies that may not be particularly necessary for the website to function and is used specifically to collect user personal data via analytics, ads, other embedded contents are termed as non-necessary cookies. It is mandatory to procure user consent prior to running these cookies on your website.
SAVE & ACCEPT